For solving LP and QP models, the Gurobi Optimizer
includes high-performance implementations of the
primal simplex method, the dual simplex method, and
a parallel barrier solver. For MILP and MIQP models,
the Gurobi Optimizer incorporates the latest methods
including cutting planes and powerful solution
heuristics. All models benefit from advanced
presolve methods to simplify models and slash solve
times.

The Gurobi Optimizer is written in C and is
accessible from several languages. In addition to a
powerful, interactive Python interface and a
matrix-oriented C interface, we provide
object-oriented interfaces from C++, Java, Python,
and the .NET languages. These interfaces have all
been designed to be lightweight and easy to use,
with the goal of greatly enhancing the accessibility
of our products. And since the interfaces are
lightweight, they are faster and use less memory
than other standard interfaces. Our online
documentation (Quick Start Guide, Example Tour and
Reference Manual) describes the use of these
interfaces.

Most of the changes in the 4.5 release of the Gurobi
Optimizer are related to performance. Users of
previous versions will typically not need to make
any changes to their programs to use the new
version. The new version does contain a few new
features, described here.

* New Minimum Releaxation heuristic: The new
version contains a new Minimum Relaxation
heuristic that can be useful for finding solutions
to MIP models where other strategies fail to find
feasible solutions in a reasonable amount of time.
Use the new MinRelNodes parameter to control this
new heuristic.

* New branch direction control: The new version
allows more control over how the branch-and-cut
tree is explored. Specifically, when a node in the
MIP search is completed and two child nodes,
corresponding to the down branch and the up branch
are created, the new BranchDir parameter allows
you to determine whether the MIP solver will
explore the down branch first, the up branch
first, or whether it will choose the next node
based on a heuristic determination of which
sub-tree appears more promising.

* Cut pass limit: The new version allows you to
limit the number of cut passes performed during
root cut generation in MIP. Use the new CutPasses
parameter.

* Additional information for infeasible and
unbounded linear models: The new version allows
you to obtain a Farkas infeasibility proof for
infeasible models, and an unbounded ray for
unbounded models. Use the new InfUnbdInfo
parameter, and the new FarkasProof, FarkasDual,
UnbdRay attributes to obtain this information.
圖片說明: 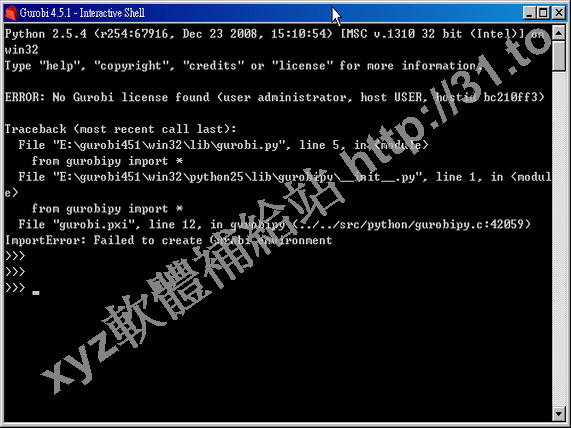